One flag. Thousands of hands. 30,000 STITCHES. Join Amanda Davis, author of 30,000 STITCHES, THE INSPIRING STORY OF THE 911 FLAG, for a new StoryMakers Podcast and learn the inspiring story of the National 9/11 Flag. Work along with Rocco & Amanda to create your own helping hand — a reminder that it feels great to work together & help others!

Amanda & Rocco ask YOU to create a Helping Hand!

Materials needed: Paper, scissors, markers, and any other materials you may want
to use to design and decorate your helping hand. 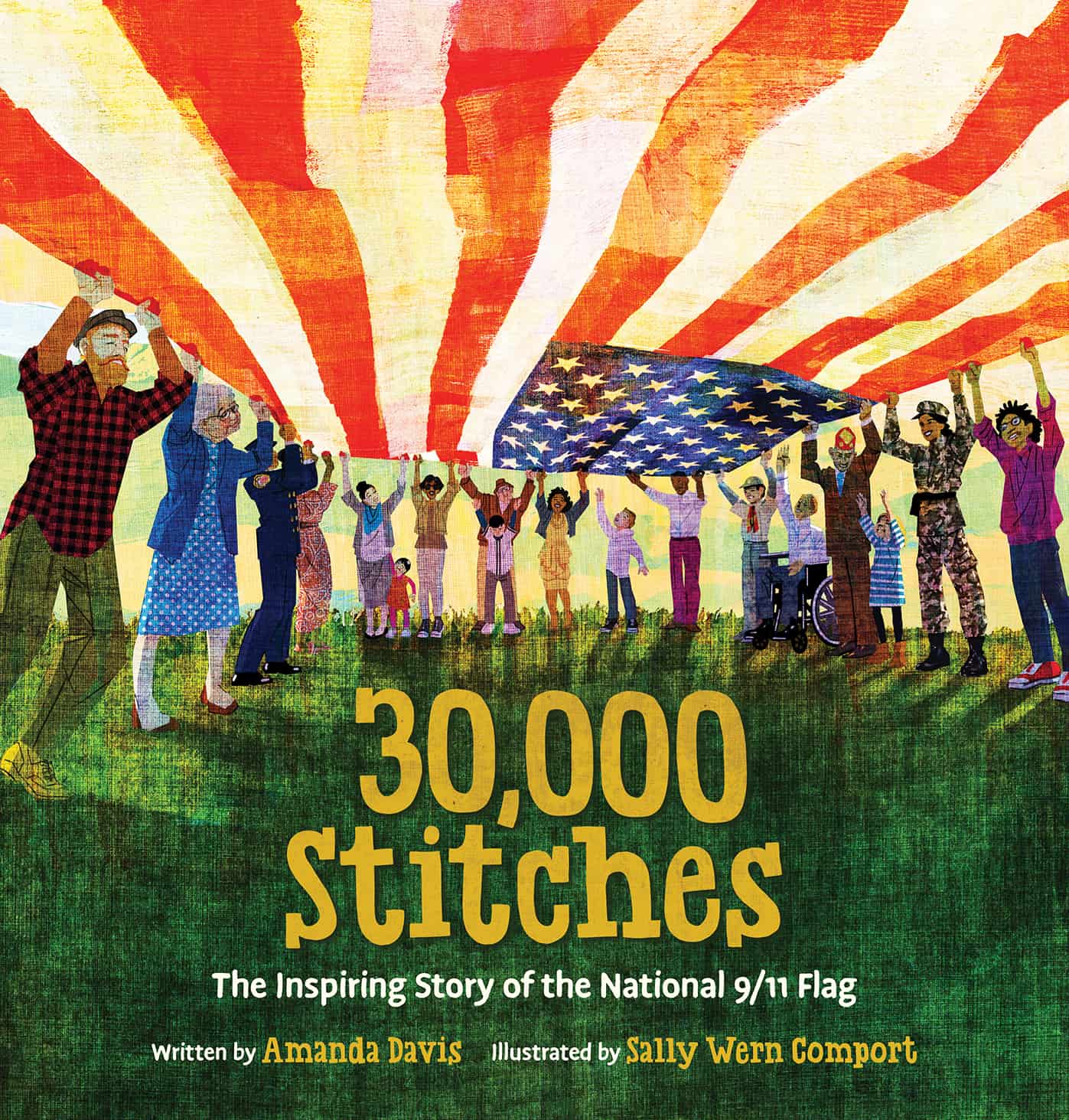 Discover the inspiring story of the American flag that flew over Ground Zero, traveled across all fifty states as it was repaired, and returned to New York as a restored symbol of unity.

In the days following September 11th, a 30-foot American flag hung torn and tattered at 90 West Street, across from Ground Zero. A few weeks later, the flag was taken down by a construction crew and tucked away in storage, where it stayed for nearly seven years.

The flag was brought out of storage in 2008 when the New York Says Thank You Foundation headed to Greensburg, Kansas, a town nearly destroyed by a tornado. NYSTY brought the flag with them, sparking a grassroots restoration effort that traveled over 120,000 miles across all fifty states, bringing together thousands of people, and helping America heal and rebuild . . . hand by hand, thread by thread, one stitch at a time.

This book is the story of that journey, a journey that ended at the opening of the National September 11 Museum, where the flag remains today. Along the way, the flag was restored using pieces of retired flags from every state—including a piece of the flag that Abraham Lincoln was laid on after he was shot at Ford’s Theater and threads from the original Star-Spangled Banner flag, which flew at Fort McHenry in the War of 1812 and inspired Francis Scott Key to write the national anthem. The pieces and threads were stitched in by military veterans, first responders, educators, students, community-service heroes, and family members of 9/11 victims, among others. At each stop, communities came together to remember, to heal, and to unite.

​Hi Friends! My name is Amanda Davis. I’m a teacher, artist, writer, and innovator who uses my words and pictures to light up the world with kindness. After losing my father at the age of twelve, I turned to art and writing as an outlet. It became my voice. A way to cope. A way to escape. And a way to tell my story. I was thus inspired to teach art and pursue my passion for writing and illustrating children’s books. Through my work, I strive to empower younger generations to tell their own stories and offer children and adults an entryway into a world of discovery. A world that can help them make sense of themselves, others, and the community around them. A world where they can navigate, imagine, and feel inspired—over and over again.

1d ago1d ago
Subscribe
Unsubscribe
Co tydzień+
Christian mom or dad, could you use some encouragement and support? Put your ear buds in for this Christian parenting podcast and get practical, faith-based inspiration through all stages of parenting — raising toddlers, navigating the school-age years, preparing for puberty, and seeing your teen soar with confidence. Hosted by Danny Huerta, in every 8 to 15 minute episode, you’ll hear parenting experts share Biblical truths, effective parenting techniques, and useful resources that will hel ...
T
The Longest Shortest Time

23d ago3w ago
Subscribe
Unsubscribe
Miesięcznie
The parenting show for everyone. Created by Hillary Frank. A Stitcher production.
F
Focus on Marriage Podcast

1d ago1d ago
Subscribe
Unsubscribe
Co tydzień+
If you’re married — or soon to be — you’ve got questions. What makes this relationship work? How do I fix it when it breaks? Where do I go when I need help? Host John Fuller and marriage experts Dr. Greg and Erin Smalley help answer those questions with practical, down-to-earth insights based on God’s design for marriage. Find answers and inspiration in every short episode of this Christian marriage podcast.
F
Focus on the Family Broadcast

3d ago3d ago
Subscribe
Unsubscribe
Miesięcznie+
Become a champion for your family in the time it takes to enjoy a cup of coffee! Every episode of the Focus on the Family Christian podcast helps you confidently guide your loved ones through the unique challenges faced by today’s Christian families. With over 40 years of trusted, compassionate stories of redemption, hosts Jim Daly and John Fuller connect you to biblically sound marriage and parenting help that is relatable, practical, and interesting. Listen/Learn/Apply/ThriveInChrist!
W
Wow in the World

36m ago36m ago
Subscribe
Unsubscribe
Co tydzień+
New episodes come out every Monday for free, with 1-week early access for Wondery+ Kids subscribers. The #1 podcast for kids and their grown-ups. Hosts Mindy Thomas and Guy Raz share stories about the latest news in science, technology, and innovation. Stories that give kids hope, agency and make us all say "WOW"!
S
Spare the Rock, Spoil the Child radio feed

3d ago3d ago
Subscribe
Unsubscribe
Miesięcznie+
The award-winning Story Pirates Podcast takes stories written by kids and turns them into sketch comedy and songs. Made up of talented comedians, songwriters, and frequent celebrity guests, the Story Pirates inspire kids to create, bringing laughter to kids and grownups of all ages with hilarious sketches, catchy original songs from all genres, and interviews with the creative geniuses behind the stories… kids!
R
Respectful Parenting: Janet Lansbury Unruffled

16d ago2w ago
Subscribe
Unsubscribe
Miesięcznie+
Each episode addresses a reader's parenting issue through the lens of Janet's respectful parenting philosophy, consistently offering a perspective shift that ultimately frees parents of the need for tips, tricks, and tactics. Janet is a parenting author and consultant whose website (JanetLansbury.com) is visited by millions of readers annually. Her work informs, inspires, and supports caregivers of infants and toddlers across the globe, helping to create authentic relationships of respect, t ...
B
Brains On! Science podcast for kids

3d ago3d ago
Subscribe
Unsubscribe
Miesięcznie+
Brains On!® is a science podcast for curious kids and adults from American Public Media. Each week, a different kid co-host joins Molly Bloom to find answers to fascinating questions about the world sent in by listeners. Like, do dogs know they’re dogs? Or, why do feet stink? Plus, we have mystery sounds for you to guess, songs for you to dance to, and lots of facts -- all checked by experts.
Posłuchaj 500+ tematów