Osiyo! That means hello in Cherokee! Join Rocco and author Traci Sorell on KidLit RADIO for a chat about her book about the four seasons, WE ARE GRATEFUL, OTSALIHELIGA, which was inspired by the people and culture of the Cherokee Nation today! Learn along with Rocco as Traci shares some words from the Cherokee language! 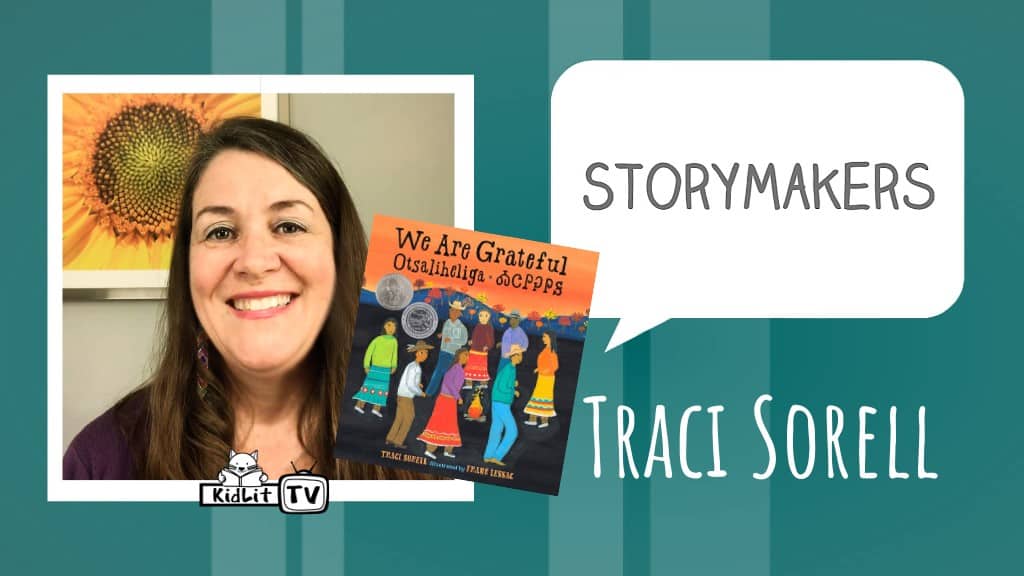 Otsaliheliga (oh-jah-LEE-hay-lee-gah) is a word that Cherokee people use to express gratitude. Beginning in the fall with the Cherokee New Year and ending in summer, follow a full Cherokee year of celebrations and experiences. Written by Traci Sorell, a citizen of the Cherokee Nation, and illustrated by Frané Lessac, this nonfiction look at one group of Native Americans is appended with a glossary and the complete Cherokee syllabary, originally created by Sequoyah.

Traci lives with her family in the Cherokee Nation, out in the country like she did as a child. Back then, she had geese, chickens, horses, dogs, and cats. Her mother’s Cherokee family has been in the area since the removal of most Cherokee people from their southeastern homelands in 1838. Traci grew up hearing stories about her ancestors and looking at their photographs with her elisi (eh-lee-see), grandma. Now her son does that with his elisi in addition to fishing in the nearby lake and learning about Cherokee culture.

3d ago3d ago
Subscribe
Unsubscribe
Co tydzień+
Christian mom or dad, could you use some encouragement and support? Put your ear buds in for this Christian parenting podcast and get practical, faith-based inspiration through all stages of parenting — raising toddlers, navigating the school-age years, preparing for puberty, and seeing your teen soar with confidence. Hosted by Danny Huerta, in every 8 to 15 minute episode, you’ll hear parenting experts share Biblical truths, effective parenting techniques, and useful resources that will hel ...
F
Focus on Marriage Podcast

3d ago3d ago
Subscribe
Unsubscribe
Co tydzień+
If you’re married — or soon to be — you’ve got questions. What makes this relationship work? How do I fix it when it breaks? Where do I go when I need help? Host John Fuller and marriage experts Dr. Greg and Erin Smalley help answer those questions with practical, down-to-earth insights based on God’s design for marriage. Find answers and inspiration in every short episode of this Christian marriage podcast.
F
Focus on the Family Broadcast

2d ago2d ago
Subscribe
Unsubscribe
Codziennie
Become a champion for your family in the time it takes to enjoy a cup of coffee! Every episode of the Focus on the Family Christian podcast helps you confidently guide your loved ones through the unique challenges faced by today’s Christian families. With over 40 years of trusted, compassionate stories of redemption, hosts Jim Daly and John Fuller connect you to biblically sound marriage and parenting help that is relatable, practical, and interesting. Listen/Learn/Apply/ThriveInChrist!
T
Tumble Science Podcast for Kids

5d ago5d ago
Subscribe
Unsubscribe
Miesięcznie+
Brains On!® is a science podcast for curious kids and adults from American Public Media. Each week, a different kid co-host joins Molly Bloom to find answers to fascinating questions about the world sent in by listeners. Like, do dogs know they’re dogs? Or, why do feet stink? Plus, we have mystery sounds for you to guess, songs for you to dance to, and lots of facts -- all checked by experts.
S
Story Pirates

3d ago3d ago
Subscribe
Unsubscribe
Miesięcznie+
The award-winning Story Pirates Podcast takes stories written by kids and turns them into sketch comedy and songs. Made up of talented comedians, songwriters, and frequent celebrity guests, the Story Pirates inspire kids to create, bringing laughter to kids and grownups of all ages with hilarious sketches, catchy original songs from all genres, and interviews with the creative geniuses behind the stories… kids!
T
The Essential Oil Revolution - Health, Purpose, and Aromatherapy

5d ago5d ago
Subscribe
Unsubscribe
Co tydzień
Welcome to the world's #1 essential oils podcast –– where each week, we demystify the world of aromatherapy and make essential oils your no-brainer approach to just about everything. Explore how to use essential oils for better health, toxin-free living, DIY projects, skincare, weight loss, emotional and spiritual health, and more. Essential Oil Beginners: Grab our complimentary quick start guide here: www.freeoilcourse.com Love Young Living Essential Oils? Us too! Or maybe you use DoTerra, ...
S
Spare the Rock, Spoil the Child radio feed

16m ago16m ago
Subscribe
Unsubscribe
Co tydzień+
New episodes come out every Monday for free, with 1-week early access for Wondery+ Kids subscribers. The #1 podcast for kids and their grown-ups. Hosts Mindy Thomas and Guy Raz share stories about the latest news in science, technology, and innovation. Stories that give kids hope, agency and make us all say "WOW"!
A
A Slob Comes Clean Podcast with Dana K White